RESNET’s new tool is called the CO2e Rating Index and is the first of its kind.

A building science expert with the FSEC Energy Research Center is part of a team that recently developed a first-of-its-kind tool that can calculate how much carbon dioxide buildings and homes produce.

“Climate change is a real problem, and the leading cause of it is carbon dioxide emissions,” says Philip Fairey, Deputy Director of FSEC, Florida’s premier energy research center at the University of Central Florida. “While the auto industry has made great strides in reducing carbon emissions from vehicles, the most well-known emitter of CO2, many people don’t know that buildings themselves are responsible for about 35% of greenhouse gas emissions due to burning fossil fuels for power, heating and cooling.”

Fairey is a board member of the Residential Energy Services Network, or RESNET, which created the tool. RESNET is a not-for-profit organization founded to develop a national market for home energy efficiency.

“With the nation’s climate goal of reducing U.S. emissions by half by the year 2030, it’s vital to have measurement tools to determine what causes these emissions and how to reduce them,” Fairey says. “That’s where RESNET comes in.”

RESNET’s new tool is called the CO2e Rating Index and is the first of its kind.

END_OF_DOCUMENT_TOKEN_TO_BE_REPLACED

Researchers at FSEC and throughout the nation determined that the lowering costs of photovoltaic modules has not impacted their durability.

In a five-year study that began in 2016, scientists from around the nation purchased over 800 photovoltaic (PV) modules, representing seven manufacturers and 13 module types, and installed them in various climate conditions to observe their performance over time. The results show that, while plenty of opportunities still exist to extend module lifetimes and improve performance in the field, lowering the cost of PV has not affected the degradation rate of the modules.

Researchers Hubert Seigneur and Dylan Colvin at FSEC®, Florida’s Premier Energy Research Center at the University of Central Florida, were a part of the nationwide study to determine whether the reduced cost of PV, due to altered designs and changes in material, would result in degradation and decreased durability of the modules. The testing procedure and the results of their studies were recently described in the article, “Onymous early-life performance degradation analysis of recent photovoltaic module technologies”, which was published in Progress in Photovoltaics, a monthly peer-reviewed scientific journal covering research on photovoltaics. Following the publication of the article in Progress in Photovoltaics, PV Magazine highlighted the study as well as the published article in their own feature.

The study found that module degradation rates tend to stabilize after three to four years, and that additional flash-testing after this period could help system owners better ensure that modules are performing according to expectations.

“The results of the study are encouraging for the industry,” said Seigneur. “On average, the performance degradation is on par with the typical warranty from manufacturers. Surprisingly, though, there were significant differences in performance amongst the leading manufacturers.”

Studies like this can reassure system owners that although there have been many changes to materials and designs in the past 10 years, the investment they make in photovoltaics is still beneficial.

The study was also beneficial to the research teams.

“This was a fruitful collaboration with leading scientists at the national laboratories, resulting in mutual benefits,” said Seigneur. “We were able to exchange details regarding our respective lab methods and procedures and further strengthen our respective programs. This study attests to the quality of the PV research conducted at FSEC.”

Muthusamy Swami was honored for his contributions to the field of building energy conservation and climate change, as well as his leadership in the local community.

On Thursday, May 19, Rep. Darren Soto of Florida met with Muthusamy Swami at Valencia College in Kissimmee, Florida, and recognized him as a distinguished leader in Central Florida as part of Asian American Pacific Islander Heritage Month celebrations.

Swami, the program director of Simulation Software Development at the FSEC Energy Research Center, a part of the University of Central Florida, was honored due to his contributions to the field of building energy conservation and climate change in over 40 years at FSEC ERC, as well as for his leadership in the Central Florida community.

Since joining FSEC ERC in 1982, Swami has lead analytical research and software capability development, with his primary area of research being the development of accurate simulation models and detailed analyses of elements relating to building energy use and indoor air quality. A major result of Swami’s research is a nationally recognized analysis tool called the Florida Software for Environmental Computation (FSEC 3.0), which is being used for research in new and innovative building technologies. He has also managed projects with the Florida Radon Research Program, as well as the United States Navy.

Swami has numerous publications in his areas of expertise and has been a project manager or team lead on several externally sponsored research projects valued at millions of dollars.

“Swami has not only been a pillar of the cultural community in Central Florida but he has also provided key leadership in the development of software tools that are used across the nation to aid in the energy efficiency and sustainability of building designs,” says Phillip Fairey, deputy director for FSEC ERC. “His research work in this arena will be of seminal value to the reduction of greenhouse gas emissions from building energy use and to the long-term sustainability of the planet.”

Not only has Swami contributed heavily to energy conservation, his passion for his community has been evident. He is a founding member of the Muthamizh Sangam of Central Florida, which is a nonprofit devoted to the awareness and promotion of Tamil culture in Central Florida. He was also the president of the Hindu Society of Central Florida from 2012-2013.

“His strength lies in providing leadership in growing the community and bringing them together, which he has done with great success,” said Soto during the awards presentation. “He has been instrumental in setting up language schools to preserve the native language, providing leadership training to youth, recruiting and posting students for internships, and advising design teams to win national awards. One such is a first-place design award for the team to him for faculty advising.”

“This award is not just for me; it’s for the entire community, especially those working tirelessly behind the scenes,” Swami says. “Volunteering has given me a greater sense of satisfaction than many other successes in life. It has helped me become a better person, and better able to put myself in other’s shoes and empathize with others better.”

Did you know that buildings account for more than 40% of U.S. total energy use and 70% of the country’s electricity use? Reducing that consumption to match renewable generation is one of the key challenges of our clean energy future, according to the U.S. Department of Energy. The need to design and operate buildings to be more efficient, flexible, and responsive is essential to help meet t

hat challenge. This is a primary focus at the FSEC Energy Research Center, which has been awarded a $1,000,000 contract for continued efforts in the Department of Energy’s flagship whole-building energy simulation software engine, EnergyPlus.

EnergyPlus is an open-source, whole-building energy simulation software that engineers, architects, and researchers use to model both energy consumption—for heating, cooling, ventilation, lighting and plug and process loads—and water use in buildings.

FSEC ERC is an essential part of the bi-annual updates for the program every year, not only providing software updates and fixing glitches, but also writing and creating new software within the program.

END_OF_DOCUMENT_TOKEN_TO_BE_REPLACED 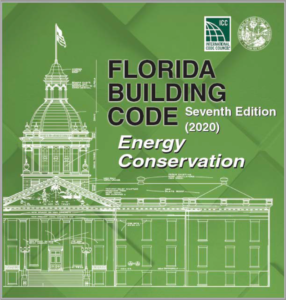 The 7th Edition Florida Building Code (2020) includes a number of changes to the Energy Conservation code that will impact how new Florida buildings are constructed, lit, and controlled. Learn about the new Energy Conservation code changes and earn continuing education credits by attending live webinar training courses offered by the FSEC Energy Research Center, a research institute of the University of Central Florida. Register by March 15th*.

*A minimum number of registrations is needed by March 15th for the classes to be held.

For more information, contact the FSEC ERC Communications Office at 321-638-1015 or info@fsec.ucf.edu.