Robert M. Reedy, manager of Transmission Line Design with the Georgia Transmission Corporation, has been named director of the Photovoltaics Division at the University of Central Florida¿s Florida Solar Energy Center (FSEC).

He brings more than 20 years experience in renewable energy to his new position, including administrative positions with Lakeland Department of Electric and Water Utilities, The Energy Authority in Jacksonville, Turbec Americas, and Georgia Transmission Corp. END_OF_DOCUMENT_TOKEN_TO_BE_REPLACED

— Taking Charge of Our Energy Future: Choosing the Better Pie

On January 10, 2006, FSEC Director Jim Fenton addressed the Florida Senate Committee on Communications and Public Utilities, commonly called the “Energy Committee,” with a positive message on how Florida can leverage federal tax credits for renewable energy and energy efficiency to significantly alter its outlook for electric energy use in 2014. Current Florida projections for electric energy use in 2014 call for Florida utilities to produce 75 billion killowatt-hours more energy than they produced in 2004, a 32% increase in energy use over the decade.

Fenton compared the “business as usual model” that results in Florida’s 2014 energy use projections against the results of an in-house FSEC study that illustrates how future electrical use could be dramatically reduced within Florida’s largest energy use sector — residences, which make up 51% of the total. 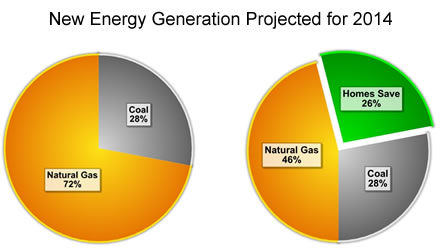 The pie chart on the left presents Florida’s current projection for growth in electric energy generation between 2004 and 2014 and the one on the right presents an alternative if renewable energy and energy efficiency are aggressively pursued by the state, leveraging the federal tax credits. (All savings were assumed to come from growth in natural gas generation due to the rapidly rising cost of natural gas.)

These results come from studies conducted by FSEC using typical Florida homes in various Florida climates. Results are then projected to statewide savings. To qualify for the federal tax credits, individual home savings are significant at 50% of heating and cooling costs. As a result, total home energy savings exceed 40% in all Florida climates.

These individual savings, when projected to a statewide level, result in significant benefits to the state over the 10-year time period
between 2004 and 2014, as follows:

Dr. Fenton’s full power point presentation, “Taking Charge of Our Energy Future: Choosing the Better Pie” and the FSEC study that developed the data for the presentation, “Potential of Energy Efficiency and Renewable Energy Savings To Impact Florida’s Projected Energy Use in 2014” may be downloaded using the links below:

James M. Fenton, associate director and co-founder of the Environmental Research Institute and professor of chemical engineering at the University of Connecticut, has been named director of the Florida Solar Energy Center. He began his new duties at FSEC on Jan. 3.

Fenton, who has been at the University of Connecticut since 1984, also served as acting head of the chemical engineering department and director of UConn’s Pollution Prevention Research and Development Center funded by the U.S. Environmental Protection Agency. He co-founded the Connecticut Global Fuel Cell Center and is part-owner of a University of Connecticut spin-off company, Ionomem Corp., which manufactures high-temperature membrane electrode assemblies for fuel cells. END_OF_DOCUMENT_TOKEN_TO_BE_REPLACED